Skip to content
Home »Jarman International News»Famous YouTuber John Daub, who is ranked one of Japan’s Top 100 Creators, has released his new channel “ONLY in JAPAN!” 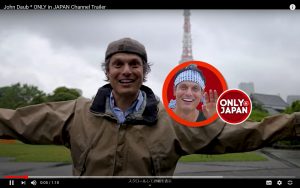 When our CEO, Ruth Mary Jarman collaborated with the well-known Youtuber, for a video discussing travel tips and secrets, the video has gotten so many views and positive comments from all over the world.

We realized not only do so many people want to know more about Japan but that John Daub’s warm and exciting approach to showcasing deep stories about Japan is what has made him become the super Youtuber that he is today!

As of now, we are pleased to announce the release of his new YouTube channel “John Daub * ONLY in JAPAN”!

We highly recommend subscribing to the channel as he will post a flood of new episodes about Japan.

The channel shows an image of “Japan” shown in his own individual way that has very useful and practical information not only for foreigners who are interested in coming to Japan, but also for all who live in Japan (irrespective of race or nationality). The information is also useful for those who are looking for a good way to attract inbound tourists from across the globe.

We are looking forward to many more of his upcoming episodes.

★John’s a part of the JI Core 50 Team! Take a look at his Profile HERE.