Summer temperatures in most parts of Japan can rise up to (temperatures nearing) 40 degrees Celsius. This scalding heat, combined with the high humidity of the island nation, makes summer an arduous season to struggle through. In Japan, despite being a longitudinally diverse island nation, there are alternatives to blasting the AC and taking shelter indoors for the whole summer. One such alternative is a jaunt to Lake Akan, near Kushiro, Hokkaido, an oasis of nature preserved in its purest form.

Lake Akan is located one-hour’s drive from Kushiro airport and is easily accessible by bus. This place is the ideal summer getaway because of its climate. Temperatures at Lake Akan are significantly lower than those in more southern regions of Japan and rarely rise over 20 degrees Celsius, even during the hottest month of August.

For a cool vacation at Lake Akan, there are two “must-dos” you cannot miss. Both happen to conveniently be spheres, one green and the other red. The green spheres are the marimo, carefully preserved as one of Japan’s national treasures. Marimo, known in English as lake balls or moss balls, are green balls of moss naturally occurring in the lake. The natural creation of these balls, with diameters up to 60 centimeters, requires specific environmental conditions, including a unique current. Marimo are thus vulnerable to the slightest changes in the environment and are drastically declining in number. Lake Myvatn in Iceland is the only other place in the world where marimo still exist naturally. 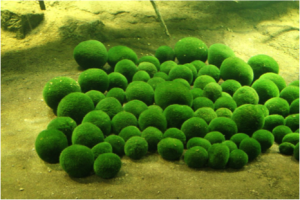 What makes the marimo a popular tourist attraction in Japan is its circular shape and puffiness, triggering the usual “kawaii” reaction. At Lake Akan, there are many activities related to marimo, including marimo-making, which involves rolling fragments of moss into balls and creating artificial hand-made marimo that can be taken home. Green marimo soft cream, made from melons, and marimo manjyu are also popular delicacies, imitating the appearance of marimo.

Once you find yourself worn out from fervently rolling fragmented moss by hand into cute little green spheres, its time to go search for the scrumptious red spheres of Lake Akan, ikura. Ikura at first glance is intimidating if you’re not a seafood fanatic. These tiny salmon eggs (salmon roe) are regarded as a great delicacy in Japan. Avoid thinking about “Finding Nemo” and just take a bite. Any of the Japanese restaurants in the Lake Akan area will serve “ikura-don” (ikura on rice) and the little tasteful red spheres should expand your palate. Yes, at first thought the idea of fish eggs may be disgusting. Trust me though; you cannot leave Hokkaido without trying the ikura. On your visit to Lake Akan, prop up your courage and take a bite. You won’t regret it.

This summer, you won’t find yourself stuck in Japan’s dead heat. You know where to go. When visiting Lake Akan though, just remember the two “must-do” spheres, the cute puffy green marimo and the scrumptious ikura.