Helping people in need, generating this energy toward Japanese business.

The recent HRM anniversary party was a big success, and Ruth had the pleasure of being the MC. She did a great job starting the event off on a bright and inspiring note with a speech in Japanese followed by an English translation for a bit of flare!

What followed was a few words by the recently nominated HRM spokesman Sakamoto Koji sensei. He authored the book “nihon de ichiban taisetsu ni shitai kaisha”, or as Ruth had translated the title “Japan’s most Cherished Companies”, and now more than ever his small and medium company-centered business philosophy is the front-running mentality in a group such as HRM. 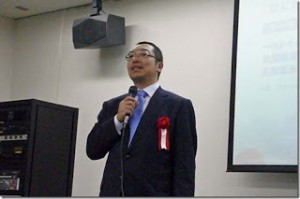 The speaker for this particular event was Dr. Hattori. Having lost his father during his teenage years, he resolved to spend his academic career pursuing medical studies. As he pressed forward, he would eventually move into optometry, an often overlooked field when compared with other branches of medicine.

Hattori sensei has involved himself largely on a volunteer basis, in working as a doctor in Vietnam. These patients are often stranded for solutions as they have no reliable access to healthcare. It is overcrowded, and the few hospitals are understaffed. As such, Hattori sensei would work long hours for little more than food and a place to stay. For this, he has been commended in the media in Japan and other countries, and is regarded a hero among those he has served. Furthermore, he has channeled the momentum of his inspiring contribution of time and energy into a mission to spread the message of benevolence, and one day hopes that we all too can “share the happiness”. Keep at it Hattori sensei, the world needs more doctors, and more people like you.

Both of these publications reflect Hattori sensei’s strong philosophies of mutual support among humans, and general acts of goodwill as being a fundamental part of human society, prosperity, and survival.