I recently opened a new craft beer bar in Tokyo and I thought an article re the process of this would be interesting.

After the forced closing of my previous beer bar in Aoyama (the building was being demolished to make way for a redevelopment) I was in a situation where I had to relocate the business as soon as possible.

Concept
The concept of the store is basically great quality handmade food complimented with great Japanese craft beer at a great price – all beers are 500 yen a glass. a collaboration of my previous beer bar along with Magical Animal. Jeremy at Magical Animal produces great hand made burgers, sausages and American style barbecue. 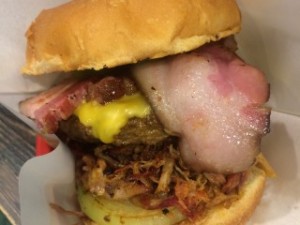 Location
I was lucky to be able to source a good first floor location in Kanda, just North of Tokyo station. Its a long, thin space, and the frontage of the space is tiny – Just a door facing the street, but I felt it was a compromise worth taking due to the location, just 20 steps from the Ginza line subway exit on a main road, and once inside we can fit up to 25 people.

I included Kanda in my prime areas of considerate as quite a few really good craft beer bars such as Devil Craft and Yona Yona Beer Kitchen have sprung up in Kanda in recent years and as well as it being such a busy business area with a lively night life scene catering to the many thirsty company workers in this area, and being a short walk from Otemachi/Marunouchi financial district. I sourced the space through one of my landlord broker contacts and we were able to proceed through the negotiation and leasing process quite quickly.

One thing that people are often surprised to hear is the high amount of security deposit required by Landlords when leasing any commercial space, and this was certainly the case in leasing this space, as I was required to pay a full ten months rent as deposit. I negotiated this down from the initial asking twelve months, but this was still quite a hit. The high level of funds required initially to lease a space is quite a barrier to doing business here but unfortunately this is pretty much standard in the Tokyo market. One bonus was that the place came fitted with a fully functional kitchen which saved the large cost and lengthly amount of time need to fit a kitchen in the space.

Beers
I wanted to expand the amount and variety of beers that we offered at the new store and I especially wanted to offer some her that were a little unusual or rare to find but keeping to the concept of specifically Japanese craft beers. This required quite a bit of research at a few craft beer festivals around Tokyo at the start of summer. A difficult job, yes, but someone has to do it.. Anyways after some very serious research and taste testing quite a number of beers, I was left with a short list of some really great beers which were a little different from what is on offer at other craft beer bars around the city. The first of these are a weizen(white beer) and pilsner style beer from a great but small brewery in Yamaguchi prefecture. We have these on tap now, and Beer Animal is the only place in Tokyo where these beers are currently available. I wanted to provide a well balanced offering of beers, so we also have an IPA as well as standard craft beer styles – a Pale Ale, a lighter golden ale and a dark beer. 6 taps in total which isn’t a huge range compared to most craft beer bars, but I think this is a good compromise due to space limitations and provides a good balance of various styles of beer.

Once we started the lease the work really started. We didn’t realize just how much of a (bad) state the kitchen was in. The previous tenant left the place in a very dirty, unsanitary state and it was up to us to get place into a usable state as quickly as possible.

When opening a food and beverage outlet the space needs to be inspected by the local authorities to get a certificate of ability to trade, Eigyo Kyoka in Japanese. This is issued by the food sanitary department at the local ward office and is essential as the business cannot trade without this permission.
After a lot of scrubbing and cleaning we managed to get through this inspection smoothly and we got the permission certificate on the spot, but we were hardly ready to open yet. We had to replace some of the kitchen equipment such as the hot plate and also buy a deep fryer to enable us to cook up some yummy fries and chicken wings. We were able to source these cheaply at a local kitchen supplies store, albeit we had to install these ourselves. We then had a bar counter installed around the perimeter of the customer area to allow for better use of space and then paint the walls and we also painted the floor which was a great improvement form the black in which we received it.

After another week of running around finalising details we were finally ready for a pre open to allow us to trial internal process and see where we could improve and be more efficient. A lot of our regulars form our previous location near Omotesando station were kind enough to come over to Kanda for a visit and to enjoy some of Jeremy’s fantastic authentic American barbecue, burgers and sausages. The initial pre open also provided us with an opportunity to take in the much appreciated feedback from regulars and friends and improve these areas before officially opening. The decor of the place especially was one thing that we all agreed could be improved, which we did with some great carpentry work from manager John and Jeremy’s painting skills.

We finally opened officially on 17th of August and are now open for lunch (yes you can get a beer at lunch time ^-^) 11:30-2pm and in the evening from 4pm.

It was quite an intense process for everyone involved as there was so much to do as quickly as possible but I am very happy and satisfied with what we have done. While it seems pretty straightforward it is difficult to realise just how many details pop up and need to be organised to get small place such as this up and running.

My advice for anyone thinking of taking on a venture such as this would be have a clear concept of what you want the store to be and have vendors and lines of supply established before starting (which we did) but I have spoken to a number of people that want to ‘open a bar’ without having any idea of source supplies or even what to serve and how to serve. One more piece of advice I would give is to not to be afraid to negotiate hard with the Landlord of the space you are considering. Surprisingly attractive results can often be achieved if negotiations are amicable and harmonious way with the Landlord.

I am very happy and grateful to my team – John, Jeremy, Masami and Colin as well as all of our fantastic loyal regular customers for their ongoing support.

We set out to make a really fun place where you can enjoy a beer or two and some great food in a great atmosphere. This, we have achieved.

Deep Japan – Experienced Senpais living in and enjoying Japan offer inside-knowledge on how to make your trip real, interesting and above all, unforgettable.

Join the Deep Japan Senpai Team – Anyone currently living in Japan for a year or more who can write tips for visitors in English is welcome to register on Deep Japan as a writer.