A Taste of Sunshine Just 2.5 Hours from Tokyo

I planned to arrive in Shizukuishi, Iwate Prefecture while the sun was still shining, but a speech in Chiba City delayed my arrival until long after the moon rose on this village of just over 17,000 residents in Northeast Japan.

It was a sweltering day with temperatures around 36 degrees Celsius (98 degrees Fahrenheit) outside and what felt like 1000 degrees inside the packed Tokyo station where I transferred from local to the Akita Shinkansen bullet train for the trip up north. I remember my days during the end of the “bubble economy” in Japan and how I always thought the stations were so extremely packed with bustling businesspeople.

During the 20-plus years of deflation coupled with factors including a declining population, the Lehman shock world financial crisis, natural disasters in Kobe and Tohoku, there was respite from the crowds across Japan and I could walk through a hub train station without being “GYWFED” (my term for the “get in your way factor”) at every step.

Now though, with a sudden increase in tourism to the tune of 46% over the last year’s numbers, hub stations are packed with people from all over the world! It is exciting to see, for the first five minutes, and then you realize that everyone is actually trying to get out. We all have the common goal of exploring this “last frontier” of Japan and Tokyo/Ueno/Shinagawa stations are the central point of lift off. The myriad of bento shops and refreshment stands will offer perfect preparatory fare for your travels and then it is up to the platform to find your car number and watch the perfect synchronicity of the Tessei team as they prepare your craft for departure.

After a quick applause and “arigato gozaimasu!” to the cleaning team, I was pleased to find my seat in the comfortably cool train car and I settled in for a 2.5 hour ride of reading, getting some computer work in and allowing myself just a bit of anticipation about my first time in Shizukuishi City. By the way, I 100 percent recommend the “Green” class car on the bullet train. It might be about 5000 to 10,000 yen more than the regular car, but the quiet, size of the seats, reclining function/footrest and other aspects are certainly worth the extra expense.

All the Simple Beauty in the Name “Shizukuishi” 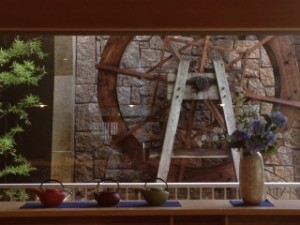 When my friends told me about Shizukuishi, I thought the name was Shizukui City (the “shi” attached at the end of place names means “City”) and it didn’t seem to click that the word “Shizukuishi” had only two Chinese Characters “雫石”with the character for City or “市”nowhere to be found.

I soon realized my misunderstanding and found that this name literally means “Droplet on Stone” one of the sweetest, most lovely names I’ve encountered. Ever. It perfectly depicts this little hamlet of bright sunlight and green fields stretched over the foothills of Mt. Iwate. During the Edo period between 1603 and 1868, the name Shizukuishi came to be as people visiting their shrine stopped to appreciate a huge Cedar tree with magnificent roots dripping pure water onto the surrounding stone.

As I thought of this beautiful name and sped towards the small just past Tohoku capital Morioka City (530 kilometers from Tokyo), I sipped the hot coffee I bought from the Green attendant and slowly enjoyed the various tastes in the “Ekiben” bento box I purchased before departure at Tokyo Station. it was a relaxing and direct 2.45 hour ride on the Akita Shinkansen Komachi bullet train and with this area in Iwate having the lowest population density of all of Japan, I was looking forward to some peace and quiet away from the hustle and bustle of my “normal” routine. And yes, that is exactly what I got!

This video gives a nice idea of Ippon Zakura, one beautiful sight available in Shizukuishi.

It was around 9 p.m. when the train slowed down just in front of JR Shizukuishi Station. Since I had a relatively large bag and a bunch of trash from the various treats and drinks I enjoyed during the ride, I was already standing in the foyer as the doors slid open to reveal the JR platform. I stepped down and the first thing I noticed was the scent. Accustomed to the city smell of heat off cement, heady Ramen or other soup-base smells from restaurant or the occasional truck exhaust, Shizukuishi smelled like a combination of pine, lavender and farm. The tinge of pine scent in the air was particularly strong and I remembered cool summer evenings in San Jose California or Evergreen Colorado. It was that type of fresh, clean pine scent you find in the mountains. The dark night did not reveal those mountains, but I could tell immediately they were there. Knots in my shoulders from daytime nervousness started to unravel and I immediately sensed a simple peace as the mountain breeze brought me the sound of crickets and rustling leaves.

There was no one on the platform, lights were off in the few station-building stores…

Deep Japan – Experienced Senpais living in and enjoying Japan offer inside-knowledge on how to make your trip real, interesting and above all, unforgettable.

Join the Deep Japan Senpai Team – Anyone currently living in Japan for a year or more who can write tips for visitors in English is welcome to register on Deep Japan as a writer.