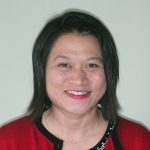 Favorite Thing About Living in Japan:meeting people and learning local stories and getting their recommendations for things to see, eat, and do. The beauty of the four seasons is a wonderful backdrop to historic temples, shrines, and buildings
Favorite Place to Visit in Japan: Iwami kagura in Shimane, Miyajima and eating the local specialties

BIO: Rose Tanasugarn is a Thai American, born and raised in Los Angeles. Her love affair with Japan began in Shimane where she was an English teacher in Gotsu City. Iwami kagura and the ghost stories of Lafcadio Hearn helped form an unbreakable bond with Shimane, the home of the gods.
Rose and her family have a special connection to Japan through sports. Her father Virachai was a basketball player in the 1964 Tokyo Olympics, while her sister Tamarine competed in tennis at the 1994 Hiroshima Asian Games, and partnered Maria Sharapova to win the 2003 Japan Open doubles. Rose was a volunteer reporter at the 2019 Rugby World Cup games in Kobe and Toyota City.
A Kobe PR Ambassador since 2016, Rose enjoys sharing the food, culture, and attractions of Kansai and Japan through social media. Her hospitality experience includes two years as a Disneyland (Anaheim, CA) tour guide.