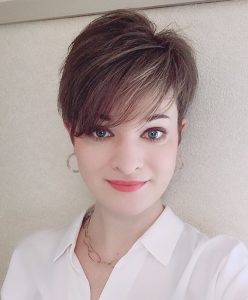 Favorite Things About Living in Japan: Great public transportation- not having to rely on a car is absolutely wonderful! Also, high-quality products, and the simplicity of medical insurance coverage.

Favorite Place to Visit in Japan: Enoshima where it’s so much fun to walk around and be a tourist.

Rachel has long been translating and helping market Hiroshima’s ‘Evening of Kagura’ performances. These performances are marketed to inbound visitors to Japan. In 2019, Rachel began working as a translator for Hiroshima City Hall in the International Relations Department.