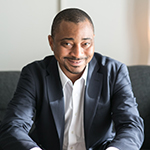 BIO: Sako was born in 1982 in Cote d’Ivoire ( Ivory Coast in West Africa). Went Lycee Scientifique in Yamoussoukro( Political Capital City of Cote d’Ivoire) which is the best high school in the country. While in high school, as part of the extracurricular activities, he learned about Japanese martial arts Aikido and Japanese culture. At the same time, he was interested in technology and as Japan is a high-tech country, he decided to go to college in Japan. After high school, he came to Japan as a government scholarship student. he learned information technology and computer science. After college, he joined an I.T. company as network/systems engineers, then specialized in I.T. cyber-security. As the president of the Ivorians association in Japan, he participates in some Japanese TV programmes to introduce Cote d’Ivoire and help investors who are interested in Cote d’Ivoire. For example, when Prime Minister Abe Shinzo visited Cote d’Ivoire, he was one of the main coordinators of his visit and helped him and his staff with translation and interpretation at meetings with Cote d’Ivoire officials.