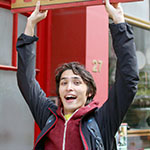 BIO: Leo is half American half Japanese and originally from Portland, OR, USA. He’s native in both English and Japanese. He worked at a TV Station in Tokyo before conducting a personal project called “World in Twelve” where he compared daily life in 12 cities around the world while staying in each for one month. Now he works as a freelance director/writer and is currently in the process of launching his own media platform.